No Denying You (Danvers #5) 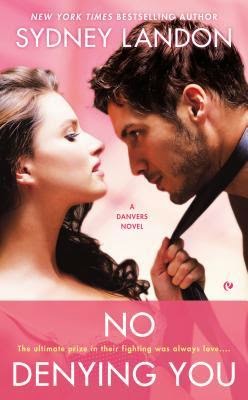 After Emma Davis’s first week at Danvers International, she’s convinced her boss will drive her crazy… Being the assistant to uptight workaholic Brant Stone is more than Emma can bear. But in her weaker moments, she can’t help but admit that the sexy control freak can turn her on with an insult more than any man she’s ever met... So when Emma gains an unexpected advantage, she blackmails Brant into accompanying her to her high school reunion. After all, the enemy she knows is preferable to a blind date arranged by her meddling mother.But before they realize what’s happening, they are doing more than acting the part…they’re living it. The war that has been raging between them shifts playing fields to the bedroom, as hate turns to lust and then to something so much more...

***I received this book in exchange for an honest review***

I fell in love with Danvers earlier this year, and since then have been blessed to be able to call Sydney a friend. An incredibly talented friend with uber sexy men in her noggin. The 5th installment to the Danvers collection comes to readers December 2nd, 2014. Agony, right? The wait is nuts. Let me tell you, from first hand experience, Brant and Emma's story is worth the wait.

Before I dive into my review, yes - you guessed it! A list of what is to come:


Emma has been working under Brant for quite some time now, and while constantly trying to get transferred to another department - he continues to deny her transfer. Everyone around see the constant fighting between the two as a hilarious form of foreplay. The only thing the two will admit is their physical attraction of the other. (And that admission is only to themselves!)

The friendships formed at Danvers continue to be my favorite part of this series. Suzy continues to be a riot, and her friendship with Emma is not lacking in the snark department.
"All right, no more. I already hate you for having a husband that sexy. Telling me he's some kind of sex god only makes me want to unfriend you on Facebook and walk away when i see you at the office." Anyone else might have been offended by her statement, but Suzy only threw her head back and laughed.
When Emma comes across a rather flattering picture of her boss, she realizes it is just what she needs to solve all her problems. With one look at the he has agreed to accompany her to the school reunion and she is sure this off hours time together will be the final push he needs to sign the transfer. The girls warned her! He is a hottie, and we already know there is something in the air at Danvers - and it smells a lot like love. While we know what is to come, it doesn't mean they don't fight it tooth and nail.
Her mouth fell open in shock when he quickly responded, "What I would really love to do is spank your ass until it shines, but I guess I'm fucked."
"I don't think you're supposed to say stuff like that to your assistant unless you're working in a brothel or something."
Brant quirked a brow at her. "Since when have we ever been concerned with what we say to each other? I don't think you should say stuff to your boss like 'blow me' either, but that has never stopped you before."
Brant pulls out all the stops with Emma. He participates in her Mom's book club meeting of Fifty Shades of Gray, he pins a flower to her dress for the reunion, goes paddle boarding and gives her the space she needs when tragedy hits hard. Danvers is such a tight family that even with all the heartache that happened in this installment, you can't help but hope for a job there when you put the book down.
I am not sure where the series is going next, but I hope for my sanity that Ava gets her story. You get to know her a little bit more in Brant's story - and I need her to find her HEA. Plus, it will keep me close to Brant and the Danvers crew and able to see how Emma's transfer is holding up!
As always, Sydney Landon offers up another FIVE STAR romance with her FIFTH installment. Great read!