The Night Belongs to Fireman 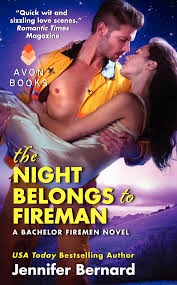 When fireman Fred Breen rescues a bachelorette party after a construction crane collapses onto their limo, the media labels him the "Bachelor Hero." But all Fred can think about is the petite brunette with the sexy mane of dark curls who bolted away from him faster than a wildfire after he carried her to safety. And when he discovers she's none other than Rachel Kessler, the daughter of a tech billionaire, the girl whose kidnapping riveted the nation, he intends to learn every intimate detail about this intriguing woman who sets his pulse on fire.Rachel can't deny the lean-muscled firefighter is smokin' hot. But after having one too many drinks at the bar where she first meets him, Rachel knows she's made a fool of herself. Yet when he rescues her from the limo, she feels safe for the first time since she was held for ransom as a child. Then her overprotective father insists Fred be her bodyguard—and his close presence kindles a burning desire that only he can extinguish.

***
Welcome back to San Gabriel. Before we go any deeper into the book, I think I should tell you a few important things about me.
***
Fred, aka Stud, has been one of my favorite supporting characters from the beginning when he correctly guessed the amount of words Kirk said to the cute waitress, or when he dance on a bar sporting just a helmet and an undergarment that read "Light My Fire," and I loved the touching moment he and Vadar shared at Vadar's wedding when he was told once the girls realized how big of a hero he was in his heart - they would be falling over themselves to meet him.

When I first found out this was his story, I was ecstatic. Watching him come out of his shell with each book, you just knew he was going to be an epic leading character. Within the first chapter, Jennifer reveals layers of him that you never could have guessed. After a little celebration, Stud and Mulligan walk into a freak crane accident that causes them to both switch gears to their rescue ways. Enter Rachel. In a smushed limo. As a trained Urban Rescue Search and Rescue member, Fred knew just what to do. He had to keep Rachel talking and remaining calm.
Of all things, she let out a burst of laughter. Slightly hysterical laughter, he noticed, as if she were clinging desperately to her control. "You're Fred the Fireman?"
"Yes." Though he wasn't sure why that was so funny.
"Do you know Thomas the Tank?"
Oh. Now he saw what had set her off. "I'm familiar with his work, yes."
After a long, and successful rescue, the beautiful and funny woman runs away from the crowd. Not before Channel 6 and the insane Ella Joy get the story of a lifetime. Stud suddenly becomes the Bachelor Hero of San Gabriel. While he avoided the media, Rachel was answering to her overprotective father. (And trying to Google what sexy fireman like as thank yous!)
"I'll be careful, Dad. I promise. I mean, I already live like a nun. but I'll try to kick it up a notch to saint."
Fred and Rachel have this spark that neither will deny, but there is something keeping them from getting things going. Not in the physical sense, because Rachel leaves him so hot he finds himself muttering nonsense like "Lamp chops," he chanted under his breath. "Cod liver oil. Creamed spinach. Bugs in my cereal milk." just so he doesn't embarrass himself with his obvious attraction to her when the doorbell rang.

I love getting to catch up with my favorites from the previous books. Vadar being one of them. And now that he is Captain Brown it is a blast to see him adjust to that role while keeping his goofy side.
Fred groaned. "She's trying to pressure me. But I'm not giving in. If I ever seem like I might give her an interview, I want you to tie me to this hose tower and stuff a rag in my mouth."
"Kinky," said Vadar approvingly. "Didn't know you had it in you."
Fred has always been a favorite of his fellow firefighters at Station 1, just never got the attention the others did. This causes his brothers and sisters to protect with a fierceness that is heart warming. Rachel's past is slowly revealed and Fred just doesn't think he is enough for a woman so perfect. Rachel deserved the best, someone who could both protect her and give her the world. Maybe a combination of Rambo and... Prince William. And Bill Gates, for good measure. It's thoughts like this, getting his sister to Ninja-sit while he was away, kittens and his humor that makes him the most well-rounded male lead. (In my opinion)

The humor amongst the firefighters will continue to be my favorite thing in this series. It is strong friendships like these that everyone needs. While everyone (Rachel included) headed to Double D's house to pack, Jennifer wrote my favorite line.
"She'll be satisfied," said Fred smugly. "It's a bedroom, isn't it? And they call me Stud, don't they?"
I almost died when reading Stud say this to Double D about Mrs. Double D. And then, I had to quickly read on to make sure he didn't get a broken nose from the smart-mouthed comments he loves. Will I tell you anymore about the ups and downs in this story? Nope! It was a doozy though. Want another list? I can give you some teasers!
Seriously, though. Jennifer ended it so perfectly. I loved the final thing Fred did for Rachel. He wanted her to know what she was getting into. And those women... too funny! I loved getting to see Katie, Cherie, Lara and Melissa chat away with Rachel watching in awe. (Even getting to hear about Nita, Maribel and Sabina was a blast!)
I feel a little empty knowing I am just about done with Station 1. I thought I was done, until someone told me that there is a novella coming out for Christmas. (Yes! Santa really does listen!) I enjoyed this series from start to finish, and there wasn't one book I didn't absolutely love 110%. Even though, the evil Ella Joy reared her ugly head all over the place - I still would give this series a FIVE! Jennifer offers you so much more than a good old fashioned love story with this series. You get unbreakable friendships, dreams being made and broken, real life issues being brought to life and so much more. A reader can't find themselves bored when you dive into the crazy world of San Gabriel's famous Station 1 and all it's former bachelor's! Before I leave you with all the ways you can go show Jennifer some love (besides buying these amazing books!) I want to share one last quote, another one of my favorite parts of Rachel and Stud's HEA.
"I've never shown up for dinner at a half-naked man's house  before."
"At least I had pants on."
"Yes, that was extremely disappointing," she said gravely, making him laugh. 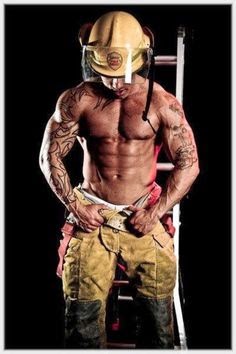 Now that I got that out of the way, this half-naked man wants you to go show Jennifer some love!
Become a FAN of Jennifers on Goodreads
Follow Jennifer on Twitter
Check out Jennifer's Website
Jennifer's Facebook
Jennifer's Amazon Author Page