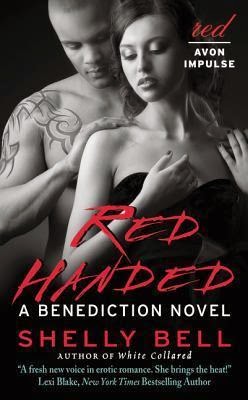 An exhibitionist who's waited her whole life to be seen …
After her stepmother is abducted, Danielle Walker has no choice but to follow the kidnapper's cryptic instructions. Under the guise of a sex slave trainee, she must infiltrate Cole DeMarco's BDSM club and find evidence of his offshore bank account … or she'll never see her stepmother alive again. But Master Cole is no stranger, and despite the dark past they share, Danielle cannot resist his magnetic pull.
The voyeur who's always been watching …
As Danielle begins uncovering Cole's secrets, the artistic voyeur arouses her deepest desires, and she surrenders to a fiery passion she never expected. But with time running out to save her stepmother, Danielle and Cole will face off against an evil growing more ruthless by the day … and discover a twisted web of lies, betrayal, and murder that neither saw coming.

***
Readers were introduced to Benediction and it's secrets in Shelly Bell's White Collared series. The series was brilliantly penned and such an intriguing take on the world of BDSM. Eagerness filled my book loving soul when she announced there would be a full length Benediction novel. Cole DeMarco is the mysterious owner of Benediction. While we know his limits and know his turn-ons, we don't know about the real man.
Enter Danielle Walker. Benediction's newest sex slave trainee. Curious as to if Cole will recognize her after all these years, Danielle infiltrates Cole's club to save her stepmother from her kidnappers. Intrigued by her own desires and yet hesitant to fall into her old lusty thoughts about Cole, she enters with an open mind plans to save her stepmother up front in her mind.
Cole wants to show Danielle just how he sees her - the beauty that exudes from her every pore. His ways may not be conventional, but he achieved his goal. Cole was her mirror.
Within the pages of this novel is a story filled with such suspense and a mystery filled with twists that left me shocked when the final culprit was revealed. NO LUCK, not spilling the beans here. The turns this story takes with each page will keep any reader on their toes. You will adore the supporting cast of: Gracie, Roman, Adrian and even Cassandra. Each has their part to play in the story.
While this story takes place in a club like Benediction, the relationship is nothing short of sweet which I think will throw people off since many assume that relationships within the BDSM community cannot be caring and romantic.

"Eight years ago, I set my eyes on the most beautiful woman I'd ever seen, She was too young for me then and circumstances kept us apart, but she was never far from my thoughts. I watched from a distance as she bloomed, dreaming about a life I could have with her if only things were different. Then one day..."
And then, there are moments when the playfulness of their budding relationship is just heart warming. They both peel away layers that have been hiding buried facets of their personalities that the connection they shared was strong enough to sense.
Tossing her ponytail over her shoulder she crossed the room, her sole focus on him.
"Yes, Master. How may I please you?"
His lips tilted up in a grin. "Oh, let me count the ways."

***
"Because when I think of you, only one words comes to mind."
She couldn't catch her breath. "What word?"
"Mine," he growled, crashing his mouth against hers in a claim of possession. 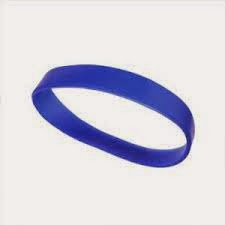 I give this book a FIVE. A blue wristband wearing FIVE!  Why you ask? I hope many more books from club Benediction join me and my Kindle! (PS - I friggin LOVED the nod to Cynthia Sax and her Sinful Rewards serial! Did anyone else catch it?!?) Now let's give the Smexy Shelly Bell some LOVE!
Shelly's Facebook
Shelly's Website
Follow Shelly on Twitter

Get your copy of Red Handed today:
Buy on Amazon
Buy at Barnes & Noble
Buy at Kobo
Buy on Itunes
Posted by Unknown at 1:21 PM