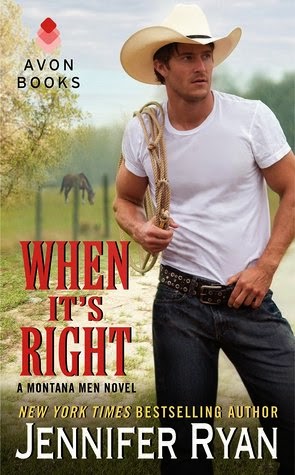 Everything's bigger in Big Sky country, including the hearts of the Montana Men Wide open sky, rolling green hills . . . Gillian Tucker could get used to life in the country—one far from the violence she left behind in San Francisco. Warily accepting an invitation to the Montana ranch that belongs to her grandfather, a man she's never met, Gillian hopes this is the haven she seeks. A sexy, overbearing cowboy who shines a light on her well-hidden dreams is not at all part of her plans. Blake Bowden's reckless past is far behind him, and as a newly named co-owner of Three Peaks Ranch, he's not taking any chances. Until a beautiful, haunted woman arrives, igniting a desire he shouldn't feel. His partner's granddaughter is strictly off limits. But the longer Gillian's there, the stronger the pull grows between them. And when a new danger surfaces, Blake will do anything to keep her safe…even if it means risking everything for her heart.

During Gabe and Ella's story you meet Blake. Lucky for us readers, we get a whole story about Blake in Jennifer Ryan's latest Montana Men novel, When It's Right. While you fall in love with Blake - so much of this story is about family. When you first meet Gillian, your heart breaks. How can it not? When put in a situation that left her no options - she did what she has done since she was too young to have to make the decisions - she took care of Justin. When her decisions brought her to family she didn't know in Montana, she was cautious. Where were these people when she was working multiple jobs just to get Justin what he needed to have a semblance of a normal childhood - something she never had.
This story starts with fear. Unstandable fear, but it doesn't make it any easier to see. (Or read!) Gillian tells Justin something often, and it make my heart break and smile all at the same time - something I found this emotion-filled novel did.

"We have to try. If it doesn't work, at least we tried. Then we'll find a better way."
Watching Justin blossom into the kid Gillian knew he always could be warmed my heart in that Proud Momma way. Being able to dive into Gillian's thoughts and desires left me aching for happiness. Would she ever allow herself the opportunity? When those walls finally fell and Blake and Gillian gave in, it was life-altering. The dynamic between the two is worthy of the silver screen!
"Blake, don't you think that at the age of twenty-eight you should stop acting like a nervous fourteen-year-old boy and just come over here and kiss me."

"Aren't you prepared."
"I'm a fucking boy scout," he said, his teeth clenched on the wrapper as he tore it open.
I have learned one thing from reading everything I can get my hands on by Jennifer Ryan - her love isn't a simple one. Her stories get you lost in the realness that she pens. You find yourself forgetting often that you are reading a novel and not living this story. And that is the beauty of a Jennifer Ryan story - her ability to seduce you to dive in and fall in love with Montana. I am anxious to see where she takes these stories that are brewing in between the lines of these stories. Be ready y'all for Jennifer Ryan to be a household name for readers everywhere!