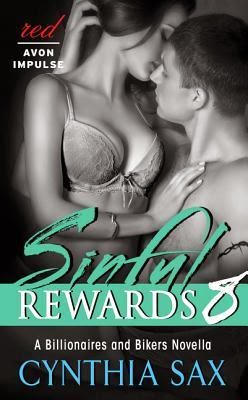 Bee Carter is no longer torn between her handsome billionaire and her tattooed bad-boy biker. After enjoying mind-melting, world-tilting sex and experiencing the pleasure of waking in her man's arms, she has finally made her choice.Or has she?A violent early morning confrontation pits biker against billionaire and results in a shocking proposal: the discarded man is willing to overlook Bee's wild night with his rival in order to win her love. He will sacrifice his pride, his heart, and everything he holds dear to have her.Bee is unmoved by the offer … until the man she's chosen encourages her to accept.Now Bee is yet again faced with an impossible decision: Does she pursue the man she craves, who has rejected her love, or does she settle for the man who will do anything for her?

***
This has been a bumpy ride so far for these three. With 4 more remaining until the conclusion, I know that Bee, Nicolas and Hawke will throw us for some loops - and I, for one, cannot wait. One thing I have been waiting for since Sinful Rewards 1, is getting to know our Jelly Bean loving billionaire Nicolas some more. I think this 8th installment was really HIS book. You saw a side to him that I have been dying to see, and a personality that I find awesome. A few of my favorite Nicolas induced moments during this book:


And then you have Hawke's "Army!" Oh my, they made me smile!
While this is Nicolas' book - at least for me... Hawke shows another side to. A side where his confidence in being all he needs to be for his Belinda is slipping. My heart hurts for that Hawke. BUT! The confrontation between former friends... WHOA! I glance at Hawke. He stalks the width of the park, pivots on his booted heels, and retraces his steps, a wild animal testing the perimeters of his cage.

CYNTHIA SAX - you kill me with this serial. I love it so much it hurts. I want to meet the woman who will be THE ONE for Nicolas. I bet she will be a fireball. And reckless as humanly possible! One more month til some more... cannot wait!