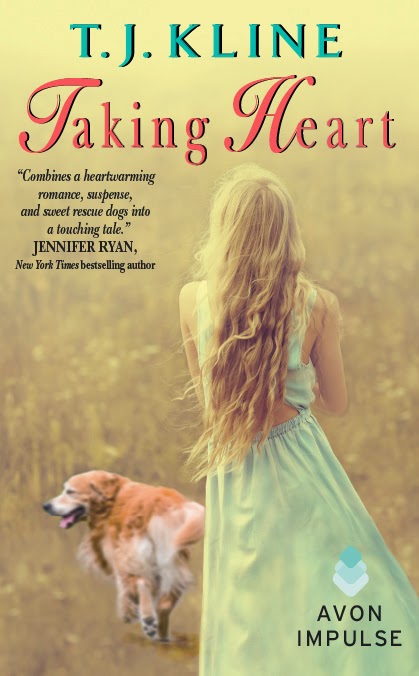 Why this cover?
Taking Heart was a book that has been ruminating in my mind for quite some time. It was a very special story for me to write, not just the subject matter but both of the characters were incredible. It wasn’t easy to tackle serious subjects like PTSD and the after-effects of trauma, so the characters were extremely important and Julia and Dylan are a perfect couple to tackle this.
Julia Hart has used the trauma of her ex-boyfriend’s attack to benefit others by training therapy dogs for PTSD. When Dylan Granger arrives at her facility, at his brother’s request, he doubts that a dog is going to help change the nightmare his life has become. The last thing either of them expected was the connection they share. But, when they are both required to face their pasts, they find it’s possible when they rely on one another.
With the Healing Harts series, the covers were specifically chosen to convey the romance of the relationship but also the emotional connection of the characters. Since animals play a very special part in this series, it was integral that they be included in the covers. I also wanted to let the readers form their own picture of Julia in their minds, without relying on a cover model. In the end, I think this cover was a great choice and conveys a touching, emotional story.