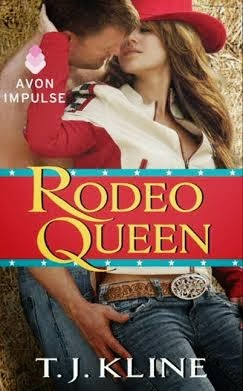 Sydney Thomas may be the newest Rodeo Queen on the circuit, but she's more than just a pretty face and fabulous horseback rider. If only her new boss could see it! But the frustrating, bossy, drop-dead gorgeous man seems bent on pushing her away every chance he gets.Scott Chandler learned at an early age that he needed to "cowboy up" and take care of his family. The one time he let his guard down, his heart got trampled, and he's not about to let that happen again. He knows Sydney's type: rodeo queens who hide their manipulative ways behind good looks, tight jeans, and glittery tiaras.But just as Scott and Sydney are finally realizing there might be more to their fiery relationship than scorching kisses and passionate nights, secrets from their pasts come back to haunt them. Will the cowboy and the Rodeo Queen ever be able to ride off into the sunset together?

The talented T.J. Kline transports you into the world of rodeos with this novel. You instantly love Sydney. Her sass and strength doesn't match her Rodeo Queen sash and tiara that sits atop her cowboy hat. I honestly didn't think I was going to enjoy Sydney - I thought she was going to be too girly for me. Oddly, Scott thought the same thing about his 'Princess.'

Scott is an ass. Simple as that.

"You are the most arrogant conceited ass I have ever had the misfortune to meet."
"Sweetheart, you need to get our more."
He is a hard-working man who has no time for love. He doesn't think that silly notion exists either. Scott endured a rough childhood, but he and his siblings were taken in by the most welcoming family in Mike. (Mind you, Mike's daughter, Liz, might be a little more than anyone bargained for!)

Both Sydney and Mike want NOTHING to do with each other. When she is offered the job of a lifetime, why would she think twice about it? Well, it is WITH Scott.  Sydney is welcomed with open arms by Scott's siblings and adoptive family. (They all run their businesses together) Scott doesn't let his guard down, he doesn't let anyone in. "You only let people see the rough cowboy side." You can see the love for his family in his actions, in his hard work - he just cannot verbalize it.

Speaking of his family. That is a FUN bunch. You have Jen, who you know is a riot being the only sister of those rowdy Chandler boys. Jen is so excited to have some female companionship in Sydney. Jen found her partner in crime with Clay. I adore Clay. He loves Jen so much, but his snark is  perfect.
"And this is why I never take you, woman. You bring everything but the kitchen sink."
"Fine." Jennifer shrugged, standing on her tiptoes to kiss his beard-roughened jaw. "I guess I'll just stay home then."
He growled and place a quick kiss on her lips. "Like hell you will."

Then you have the baby, Derek. Derek is just 22 and doesn't possess the same work ethic that Scott, Jen, Clay and Mike have. He shows an intense interest in Sydney instantly. Shouldn't be a problem since Scott doesn't like Sydney, right?

This book was filled with jealously, love, fights, murder and such a sweet and GRAND gesture to ensure a certain cowboy gets his HEA. "Maybe you should cowboy up and admit the truth." I finished this book just in time to pick up the newest book which stars Derek. Love a romance filled with everything a cowboy loving girl could wish for? What are you waiting for then - pick up Rodeo Queen and fall in love today!