The Cowboy and The Angel 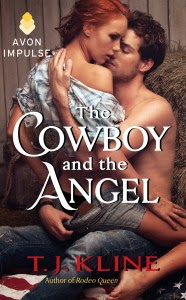 Reporter Angela McCallister needs the scoop of her career in order to save her father from the bad decisions that have depleted their savings. When the opportunity to spend a week at the Findley Brothers ranch arises, she sees a chance to get a behind-the-scenes scoop on rodeo. That certainly doesn't include kissing the devastatingly handsome and charming cowboy Derek Chandler, who insists on calling her "Angel."Derek has a rodeo to run and a chip on his shoulder. He has no time for the fiery woman who is clearly hiding something. But for some reason he can't keep his hands off of her. Their connection is instant and explosive, but Angela's secrets could threaten his family, and Derek needs to prove that he's not the irresponsible kid brother anymore.When the rodeo dust has settled, will the Cowboy and his Angel allow themselves to give in to the attraction that threatens to consume them both?

TJ Kline ropes you back into the world of Rodeo with the second installment in this series. We welcome back all the feisty characters from before. Mike is still the meddling matchmaker, only this time his sights are set on Derek. Derek, the baby, never cared for the responsibility needed to help with the family business. That is until all the shenanigans during Scott and Sydney's adventures led him to 'cowboy up.'  Derek has his mind on ONE thing - protecting his family and not letting them down again.

That is until Angela walks into his rodeo. She is full of fire and ice, and he can't stay away. "You might want to pucker up, cowboy, because the next time you see me, you can kiss it." Luckily, once the rodeo is over - he won't ever have to see Angel again. Our favorite matchmaker, Mike, has different plans. In order to protect the family and the sport, he invites her to spend a week with them at the Ranch. "While she was certain anyone could see the fury in her eyes, Derek remained as maddeningly unperturbed as ever, with his thumbs hooked in the front of his chaps and giving her that cocky, playboy grin of his. He was so confident  he cold win this argument. It took every ounce of self-control to keep herself from smacking him."

I loved the second glance into this family. Scott is the same reserved cowboy you met in the last book, except when it comes to Kassie and Sydney. Heart-melting is the only way to describe how big of a softie he is around Kassie. Derek on the other hand isn't the same lanky kid you met last time. "...he seemed to have muscles upon muscles." I got as frustrated as Mike, Scott and everyone else as the two of them fought what everyone could see. This installment was filled with so much. You get your HEA mixed with some blackmailing, untimely deaths, a lost (but found) finger, daddy issues and so much more. With all this going on under one cover, you would think it would have trouble flowing - but Tina amazed me with the fluidity she did it with. Angela has a past and a present that she thinks will prevent her of ever having a future, and she built walls all around her heart to ensure that she doesn't get hurt. "Trust me, cowboy, this isn't a book you want to read."

The heat between these two is off the charts, and yet leaves you wanting more. They both want to protect their families that they aren't concerned with what is right under their noses. Once they give it ONE DAY, there is no denying that is transpiring between this city girl and her cowboy. "I'd like you to stay," he clarified. " I think I love you."

I give this book a FIVE stars!