Something Strange and Deadly - Susan Dennard 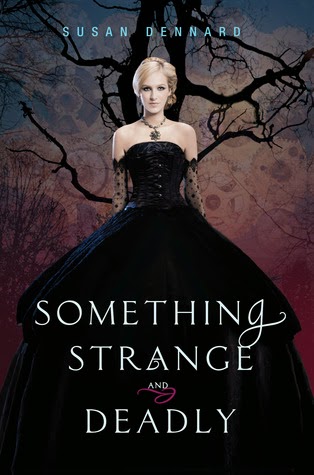 There's something strange and deadly loose in Philadelphia...

Eleanor Fitt has a lot to worry about. Her brother has gone missing, her family as fallen on hard times, and her mother is determined to marry her off to any rich young man who walkers by. But this is nothing compared to what she's just read in the newspaper—

The Dead are rising in Philadelphia.

And then, in a frightening attack, a zombie delivers a letter to Eleanor... from her brother.

Whoever is controlling the Dead army has taken her brother as well. If Eleanor is going to find him, she'll have to venture into the lab of the notorious Spirit-Hunters, who protect the city from supernatural forces. But as Eleanor spends more time with the Spirit-Hunters, including the maddeningly stubborn yet handsome Daniel, the situation becomes dire. An now, not only is her reputation on the line, but her very life may hang in the balance.


I remember being at RT and getting swag from this author. Bookmarks and whatnot. They looked good and I'm finally just getting around to reading them. This is a historical YA paranormal book. I love historical books but I Hate the women of that time. I love strong, kick ass heroines and Eleanor Fitt is not one of them. She was annoying, cowardly and at times I thought she was going to pee herself. But she had a smart mouth and the potential to be better than the women of her time. I guess this book was the perfect example of character growth and development. If you have ever read a story where the kick ass heroin hints at a time when she wasn't so kick ass and some hard times or extenuating circumstances made that character who she is today, that is that story for Eleanor Fitt. This is the story that defines the type of woman she will become and its not a cowardly woman of her time. She becomes strong and brave. She ends up with war wounds that no one should have. I can't wait to read more from Miss Fitt of the Philadelphia Fitts. This sums it up perfectly...

"When you first came into our labs, I thought you were a snobby princess who only cared about herself. Just the sort of person I hate."
I bit the inside of my mouth, trying to keep the thirsty ache away. "A-and now?"
"Now..." He shook his head and gazed at his cap. "Well, you're none of that. I was wrong. You're an empress with grit and brains, and I wish..."

There was just as much mystery in this book than there was the walking dead. It all started with her father and the people her father called friends. There is betrayal, bullying and secrets. There is so much more to Clarence than you see in the beginning. I loved the spirit hunters. Daniel especially. there wasn't much spark in the love interest department as I think was intended. I really didn't feel for either guy until the end.

"The Fault is not in our stars," I whispered to the ceiling. "But in ourselves. This was my choice."

This book didn't really get good until the end because I just didn't like her much. I did start to like her more and more throughout the book and towards the end it was really good. I will be reading the whole series and I intend to start the next one immediately.

And with all the strange and deadly things in the world, what was there even to dream about.

I give this book a 3.5 stars and I have a feeling this series is only going to get better and better and I will be there for the ride.