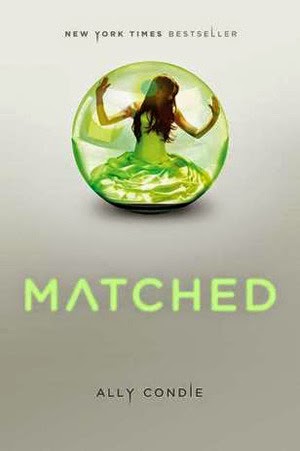 Cassia has always trusted the Society to make the right choices for her: what to read, what to watch, what to believe. So when Xander's face appears on-screen at her Matching ceremony, Cassia knows with complete certainty that he is her ideal mate... until she sees Ky Markham's face flash for an instant before the screen fades to black.

The Society tells her it's a glitch, a rare malfunction, and that she should focus on the happy life she's destined to lead with Xander. But Cassia can't stop thinking about Ky, and as they slowly fall in love, Cassia begins to doubt the Society's infallibility and is faced with an impossible choice: between Xander and Ky, between the only life she's known and a path that no one else has dared to follow.

I'm not sure what I have against firsts in a series but I haven't been impressed here lately. Not saying that this was a bad book because it wasn't. Not by a long shot. I feel like if I would have read this book back when dystopians was a new thing, I would have been greatly into it. But it just seemed very familiar. Already done, society has taken over, nobody wants to fight, Cassia thought everything was perfect until she met a boy. Very familiar. except when it wasn't. The characters were different. I kept comparing Cassia to Katniss or Tris but Cassia isn't in the hunger Games or in Dauntless. I honestly don't think Cassia would have made it five minutes in the Hunger Games or even jumping on that first train after joining Dauntless, if that's what faction she would have chosen. Cassia is normal. She is not overly brave and she doesn't really fight society all that much. She does wonder though, and in this book, wondering is dangerous. She falls in love with someone who is not her Match. She does very small, little things to show her defiance to society. She wonders, she learns and she creates. Cassia grows strong and she starts to see that everything in Society is not as perfect as she thought and when things start to get a little crazy she wishes that everyone had the right to choose. She wants to choose the food she eats, the clothes she wears, the things he can read, and even who she is matched to.

Xander and Ky, the two guys in this story. One is her Match and her best friend since childhood, and the other a mistaken face that pops on her screen. One she loves, and one she loves a totally different way. I love them both for so many different reasons.

"For a moment, he leans over the platform and I see what I need to see. I see his eyes, bright with life and fire, and I know he won't stop fighting. Even if it's the kind of quiet fight on the inside that you can't always see. And I won't stop fighting either."

"Every minute you spend with someone gives them a part of your life and takes a part of theirs."

"Only when I hold onto nothing can I be the best, only then can I be what they expect me to be."

"Growing apart doesn't change the fact that for a long time we grew side by side; our roots will always be tangled."

"...they are giving us pieces of a real life instead of the whole thing. And I'll tell her that I don't want my life to be samples and scraps. A taste of everything but a meal of nothing."

I am already into the second one and it is so much better than this one.  I am loving these books and I keep waiting for things to happen that seem to be just out of arms reach.