Sophie Jordan was a recommendation by a favorite author of mine, Codi Gary. When I received the upcoming 3rd (and final) in the series in my first Avon Addicts E-Book bundle, I knew it was time. I settled down with my Kindle and opened up the first book, Foreplay. 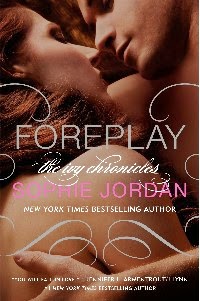 Pepper has been hopelessly in love with her best friend’s brother, Hunter, for like ever. He’s the key to everything she’s always craved: security, stability, family. But she needs Hunter to notice her as more than just a friend. Even though she’s kissed exactly one guy, she has just the plan to go from novice to rock star in the bedroom—take a few pointers from someone who knows what he’s doing.

Her college roommates have the perfect teacher in mind. But bartender Reece is nothing like the player Pepper expects. Yes, he’s beyond gorgeous, but he’s also dangerous, deep—with a troubled past. Soon what started as lessons in attraction are turning both their worlds around, and showing just what can happen when you go past foreplay and get to what’s real…

Foreplay welcomes you to the life of 20 year old friends: Emerson, Pepper and Georgia. Georgia is the friend who has been in a steady relationship with the same (BORING) guy since she was 16. Emerson is the wild and crazy friend, and Pepper has been in love with her friend's older brother for as long as she could remember. Hunter has always seen her as a little sister. Foreplay is Pepper's story to tell.

News breaks that Hunter is newly single, and Pepper decides she needs to gain some worldly experience in order to make Hunter look at her in a different light. Where better to find someone to teach her the ways then the bartender that everyone is talking about over at Mulvaney's? The girls head out and Pepper is open and willing to take all advice that Emerson can dish out, under one circumstance.

"I want the bartender."
Emerson smiled slowly, nodding in approval. "All right then. The bartender it is."
This story is full of amazingly strong friendships between these three women. I loved that the most. (Well, 2nd to Reece - the bartender!) It is reassuring to see positive female relationships I found myself wishing I could be the fourth in their group. Friendships like this aren't a dime a dozen.

Pepper and Reece's interactions are explosive. The physical attraction is clearly there from their first encounter before the bar. Something about Pepper causes Reece to crave her closeness every chance he can. Her friends see the relationship change from a means to an end (Her end being Hunter) to a real thing before she can see it, or admit it.
"But sometimes the thing you want isn't what you really need."
...
"Why does it have to be Hunter?"
Pepper cannot wrap her mind around her future NOT being Hunter. It has always been the goal. She has always wanted to be a part of that family. Hunter was safe. Reece was passion. Reece was risk. And that scared Pepper beyond belief. Scared her because of how Reece was becoming so important to her. Even sick, he was seducing me. He probably didn't realize it. It's just what he did. Who he was. How he affected me.

Hunter finally notices Pepper, and she couldn't be happier. Or could she? Why does Reece keep entering her mind? Doubt starts to fill her when it comes to her HEA with Hunter. Then tragedy hits and she lets the words that have filled her heart leave her lips when Reece comes to her rescue. "Love. You."

I am a grand gesture kind of girl, and Reece pulls out all the stops. He is so forward with his feelings for her, how could you not swoon? I did. Often. And then, Disney World? That was just so incredibly sweet. A wonderful, well-rounded, super hot NA book.

What happens when a girl who always calls the shots meets a guy who's too wild for even her? 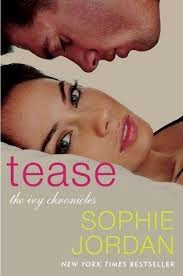 Never let them see the real you.
Never fall in love.
Always leave them begging for more.

Emerson knows the deal. Guys are fun to have around, but you don't fall in love.
Love was losing control. And I never lost control. I just made it look like I did - hooking up with different guys every week - but I was always fully cognizant of my actions. In charge every moment along the way.

Emerson finds herself hanging out with Annie since both of her best friends were preoccupied with their boyfriends. Annie While hanging with her single friend seemed like a good idea at the time, when they showed up to a biker bar and said friend left her stranded after she had drank a few too many drinks, she finds herself relying on the kind offer of a hotter than sin biker she meets in the bar. Shaw, while taking a verbal lashing from Emerson takes care of her and gets her home safely, but not before she wakes up partially naked in his bed. (Not telling you any more about HOW she got there!)

Content to never see this man again, she joins her friends for a party. While chatting with Pepper and Logan (Reece's hottie of a younger brother) she spots him. Such a small world this is. It turns out Shaw a cousin of Beth, whose party they are at. Shaw, a former Marine, is loyal to the core. He rescues Emerson, even when she doesn't think she needs it. Emerson isn't in the game for a fairy tale ending, she doesn't think she needs or deserves it. Shaw, on the other hand, knows that is what she deserves which is why he is in constant need to rescuing her.

Emerson may not want the same things that Shaw wants, but he makes it happen. She thinks she succeeded in paying her way at dinner, only to find that he slipped the money back into her pocket without her noticing.

The artist with Emerson couldn't hide the feelings she developed for Shaw. It showed in her painting. She didn't need anyone to see this piece, and yet her teacher insisted on it - and her grade depended on it. When she spotted him across the room seeing her picture, she knew she was gone. When her secret was revealed, he couldn't understand WHY she allowed people to think what they thought of her. My heart melted when she finally let him in.
"Don't leave me."
"Oh, Emerson, I couldn't if I wanted to."
Intense Shaw was laying out his feelings for Emerson to see, and she just couldn't. With never feeling loved or accepted, she just couldn't give herself to Shaw. It broke all her rules. After a Teen Wolf marathon with a newly single Georgia and Pepper - she texts Shaw with what is my favorite line in the entire book. (And there are some great ones - I tell you the banter between these two is epic!)
You don't have to chase me anymore.
Emerson and Shaw's story had more pain in the back story. I felt for both of them, and I melted when they protected each other. I loved that he didn't give up, even when he tried to give up. His heart was in it 110%.
Loving someone is scary. That was part of it. Always. Knowing, that at any moment for any reason it could be lost. But I wanted that. I wanted love. Even if I couldn't control it. I wanted it. I wanted him.

***
Overall, I must say that the first two books in the Ivy Chronicles were amazing. Sophie creates a world filled with strong emotions and relationships. Personally, I think it is very hit or miss within the New Adult genre. In my experience NA tends to lean more towards YA or Adult. Not this series. Sophie perfectly crafts what I believe this genre is trying to achieve. Her ability to maintain strong friendships throughout the books while romance blossoms is very important to me. A strong FIVE 'New Adult' Stars for the first two books in this series!
Now let's show Sophie Jordan some LOVE!
Sophie's Facebook
Follow Sophie on Twitter
Sophie's Website
Posted by Unknown at 4:08 PM