Out of control (untamed #2) 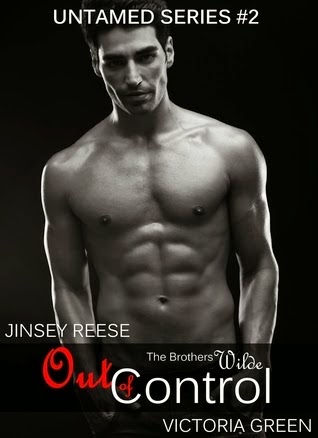 Three years have passed since Ree and Dare last saw each other that day in the hospital. How much have these two changed? A chance meeting in the City of Love. Both running from things they want to forget and towards dreams they hope to achieve. Victoria and Jinsey outdid themselves with part 2 of this series!
Here's our DUAL REVIEW!


After three years did you see much of a change in Reagan?
Catherine: Yes and No. You see the potential of BIG change. She has a ton more confidence and I love that she took her dream to Paris. I wish she would have done it in a more "STICK IT TO THE MAN" kind of way, instead of the Dear John way she left her parents. But, baby steps... baby steps! I love her carefree spirit that she has in Paris! I honestly am the most eager to see her progression throughout the remaining 4 parts! I get nervous the closer she gets to revealing the reasons behind her fears. I want to be friends with Ree.

Kristyn: At first I thought she was stronger but really she wasn't. In ways she was more broken. She didn't stand up to her parents, she ran from them. She got her freedom and seemed okay until Dare showed back up in her life.

Dare?
Catherine: Dare is so strong. Paris to me was a shock to see him there. He was so hidden and lacked confidence with his art. My heart swelled when I saw that he took those steps to follow his dream. (Besides the fact that I am sure heartbreak lead him to flee) His wall he has built towards Ree breaks my heart. Every internal battle he faced - I faced. My fists clenched with him EACH and EVERY time. And his family! I love his siblings, and with each glance into their lives and personalities, my need for their parts in this Wilde series to be written increase! I cannot wait for Dax to find "THE ONE."

Kristyn: I love Dare. I love that after three years, he is still affected by her. His life seems to be so much better than before. He is more wary of her and doesn't let his guard down often, which actually I don't blame him. He was more confident and just more Dare.

Favorite Quotes?
Kristyn:
“And then he closed the distance between us, took my face in his hands and crushed his mouth to mine.
And I was alive again.”

“We were separated by so much more than three years and a few feet. Even though I was living in his world now, we were not in the same place at the same time.”

“The ball was in Dare's court now, but he wasn’t even interested in playing the game.”

“Finding closure could go fuck itself. I wanted Dare.
Right now. And always.
That was not going to change.”

“Fucking hell. How many times did I have to be hit in the face with how stupid I’d been to let him go?”

“Art, like love, was one of those undefinable things in life. Sometimes it was just about the feeling it gave you, and YOU alone. The kind of feeling that made your heart beat to a different tune, and the entire world look just a tiny bit brighter..."

Catherine: (I see how Kristyn feels when I do quotes first! Luckily, there were SO many quotable moments in this book!)
"Three years ago, I'd had to fight off butterflies around Dare. Now they were drowning in unshed tears."

:"...Then leaned down and crushed him mouth to mine with so much unbridled desire I saw stars behind my eyes."

"He was like the worst kind of addiction to the most amazing drug I'd ever had."

"You've done amazing, Dare. I'm only trying to help because you're obviously in a bind and you can't do everything on your own. Sometimes you actually need other people, you impossibly frustrating, too-talented-for-your-own-good, fucking prima donna."

Thoughts?
Kristyn:  This book was so good it hurt. There were edge of the seat moments when I forgot to breathe and had to remind myself later. There were moments that infuriated me when I wanted to jump through the pages and yell at them both. There were heart stopping moments when I felt that everything in their little world was going to be okay and that love really does win out in the end. Then the hell of a cliffhanger happened. I need this next book and them together like I need air to breathe.

Catherine: Good God! I think it Victoria and Jinsey's goal in life to give me a HEART ATTACK! Now to give them credit, they did tell me that I probably shouldn't read it until #3 is out due to the cliffhanger, but HOW did they expect me to wait any longer to see what happens after 3 years. My breathe was held on more occasions than not, my panic attacks reared their ugly heads when she braved the metro! (Even more the 2nd time!) Your heart is glued back together, Ree & Dare are making strides in the HEA direction, and BAM! You are hit with THE mother of all Cliffhangers! Just so you know, these two will get the bill for the required therapy needed to recover from that!  If you haven't read these 2 books - DO SO! You will not regret it! An EASY FIVE STARS from this gal!!! And I second Kristyn's comment that "I need this next book and them together like I need air to breathe!"