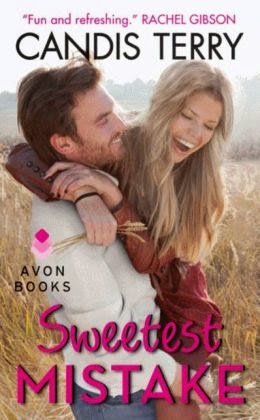 Sweetest Mistake is the 2nd installment in Candis Terry's Sweet, Texas series. In this book in hop right back into the newly renovated town of Sweet and the rambunctious Wilder family. While Reno is off helping Charli pack her stuff up and move to Sweet, we spend some time with Jackson Wilder. "The man oozed sexuality as if at birth he'd been granted an extra ration of  snap and sizzle." Jackson is focused on his life being a father to the adorable Izzy and his full time position as a Fire Fighter.

There are several things everyone needs to know about small towns and Texas. 1) "Everyone in the Lone Star State knew that the higher the hair, the closer to God." 2) Gossip never stops! On his way to work, he is stopped by a local deputy and informed that his Best Friend, Abby is back in Sweet. And with that simple piece of information, Jackson's entire world if flipped upside down. Abby and the Wilder family had grown up as one, he was the daughter Jana never had. When she split for Houston without an warning and cut all of Sweet out of her life - Jackson had been beyond hurt. With the loss of Jared, Joe and his marriage - he was alone. He is beyond angry that his best friend had bailed. Before he knew it, he was driving to her old house to get an explanation.

Things don't always go according to plan. This story of Jackson and Abby attempting to re-kindle a friendship that spanned over 10 years was difficult on both parties. (and me!!!) Often they found themselves slip into the banter and ease of yesterdays and when a stolen glance or a lingering touch caused one to think to long, all hell broke loose. "She looked amazing, and as she came toward him, a frission of electricity tingled in his hands. Below his waist, there was a whole lot of hell yeah going on."

It seemed that EVERYONE in Sweet knew they loved each other, except for them. Hell, Fiona (Izzy's Momma) even knew the first time he said Abby's name. Both have always been too afraid, too dense, too young or too stubborn to lay their feelings on the table. Trust and believe, the wonderful people of Sweet won't let it go! Momma Jana is all about setting up awkward and uncomfortable situations. After all, she is getting older and she wants more grandbabies! "If they want tacky, we'll give it to them right here in Sweet." I would kill to be her daughter-in-law! I mean who wouldn't want to be snuggled up to one of those Wilder men in their Wranglers and boots? *swoon* They find themselves in uncomfortable situation after uncomfortable situation, and I love it. Each time, one of them is trying to push the envelope while the other has decided it isn't the right time. One of my favorite interactions is this one:

"You going swimming or something?"
"No."
"So you're what, just going to stand around looking fantastic in your underwear?"

Jesse might be my favorite Wilder brother! His methods to light a fire under Jackson's ass are classic! And his assistant problem is the funniest situation I have ever heard of, even after the reality of it all comes to light.This playboy gives Chester, Sweet's oldest living playboy, a run for his money with the rumors that surround his new assistant each couple of weeks. Jesse is just like the rest of the Wilder family when it comes to looking out for each other by any means necessary. "Sparkplug" (Abby's nickname) is no exception to that rule! Jesse learned the most from his Momma's ways! I think when Jesse finally finds his match in life, it is going to be FIREWORKS. (Loud and explosive!)

Date auctions, wedding plans, awkward conversations between an ex-wife and current girlfriend, fires to be put out, engagements (YES that is plural!) a pair of crutches, a pregnancy and some house plans is what you will find (AND MORE) in this trip to Sweet. I can't give away all the juicy details, but this book had me on a roller coaster of emotions. I wanted to smack Jackson upside the head so many times I lost count, but I loved him no less. And while Jesse is my favorite Wilder, so I am super excited to get my hands on the next book, Something Sweeter, I am just as excited to be able to catch up with Abby & Jackson and Charli & Reno.

When Abby finally gets through Jackson's tough skull, there is one line that stuck (pun intended!) with me well after I finished the book: "You pray really hard that life will hand you a bouquet of roses instead of thorns. That's all you can do." I just loved when she said this. It tied the entire story up with a pretty bow, like the ones Miss Giddy wears.


ROCKING JOB Candis and FIVE STARS from me for this one. I adore a stubborn love story!

Now to show our girl, Candis SOME SWEET LOVE!